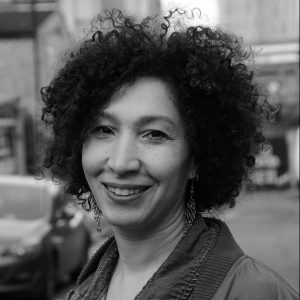 L’Aubaine (Laurie Bender) from Geneva, Switzerland, based in London. She started performing live visuals in while studying a master in Digital Arts in Barcelona. For over 10 years, she’s been exploring live visuals interconnected to music and sound, projections into the spacial dimension, as well as different narrative forms.

Her VJ sets (live visuals) and live mapping sets brings you on a seamless visual journey, creating composition live like a painter on her canvas. She crafted her unique style over the years, mixing self-produced content, using analogue and digital techniques, hand-drawn animations, 2D and 3D animations and motion graphics, footages. She also adds video synths to her set and also pure analogue performances.

She loves projecting out of the simple rectangular screen with multi-screens, projection mapping, and in immersive environments.

L’Aubaine was one of the 3 visual artists featuring in Resident Advisor (RA), Art + Sound published in Oct 2021, having to create an audiovisual piece, with interviews and showcasing her work flow and inspiration.

She was also one of the 4 visual artists to participate to Prada Extends, event curated by Richie Hawtin at the Tate Modern, London in Nov 2021.

She collaborated with Kate Simko and London Electronic Orchestra, for an all women event at the Royal Albert Hall in March 2018.

She performed mainly with electronic music, techno, house but also with jazz and experimental music.

L’Aubaine was also involved in the organisations of events. She was part of VJ London organisation team, from 2015 till 2019, where she organised many of the monthly meet-up & showcase. With VJLondon they also organised bigger events (AV Depot, London Is Dead) with interactive installations, AV performances with artists based in the London area and international.

In 2013 with Basilar Records, they organised Basilar Presents,,,,, a regular event that paired visuals artists and dj/producers from the label but not only.

Resolution Events / Live at MOT – Streaming
Live visuals alongside dj set of Alexis and Charles Vaughan
Filmed at venue MOT18 (without audience) on 25 June, premiered in July and March 2021

DAAS
Invited with VJ London, presentation and VJing at the VJ Symposium alongside live of HRTL and at the after-party.
Kosice, Slovaquia – 23-25 Nov

“DECONSTRUCCION”, narrative video in realtime
Proyection on the urban intervention “#Rehabilitación”, of the artist Marika
calle Ginebra, Barcelona – 27 may 2006